This past Saturday marked the second leg of our journey, from out of the (relatively) familiar confines of a posh hotel in Suphan Buri to the unfamiliar sights and sounds (and smells) of rural Suphan Buri. I was incredibly nervous about meeting my host family- Who would be part of the family? Would have I have to share a room? Would I have any privacy at all? How do we navigate the inevitable vapid looks and awkward moments?

Well, some of the nerves were allayed when I was greeted by this kind woman, nicknamed Lek-Lek (very small). 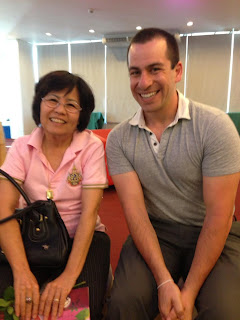 We gathered all my crap (to which Peace Corps "generously added" a solid 10 more pounds of various... things.) and threw them into the back of her truck. A man had accompanied her to the greeting ceremony, but failed to join us in the "getting to know each other" session. I had assumed he was her husband and was confused by his absence. He did drive us home though, so I continued to presume he was my hostfather.

Immediately after dropping off my life in its physical manifestation, Host-mom said something about a moto sai festival and to get ready to go. I was still in my riap roy clothing (culturally appropriate appearance; seen above), so I put on my dress shoes and away we went. Lo and behold, this was some sort of interesting super sexy moto sai gathering.

I saw all sorts of scantily clad women, models, and some baffling super sexy concert going on. While I was a few hundred feet out, I could make out half naked girls poorly dancing, gyrating, and more so than not, shaking what their mamas gave them, all to music that was dubbed over with excessive female moans. I instead just ate wet peanuts and spicy battered sugar puffs.

We left after a short while and upon arriving at home, I met a well-dressed man. Host-mom says "Paa,"  and I then realize that this is my real hostfather. I wai (Thai gesture for showing respect, similar to a bow in other Asian cultures) him and get swept into a car once more.

Due to the lack of adequate language skills on either end, I'm definitely out of my comfort zone with regard to me having literally zero idea about what is happening, where we're going, etc. Two seemingly strange men accompany us and we begin the ride to who knows where. We drive on some completely unlit, bumpy, dirt roads in the middle of what has a distinct appearance of nowhere. I begin recalling Peace Corps' homestay family selection process, as, at this point, I am not necessarily ruling out my body being harvested for its organs. While I figure the odds are greatly against it, I also figure that I'm currently in a car with people I just met less than two hours ago, in a place far from home, with potentially no witnesses to what may end up happening, this is probably  how disemboweling starts. I concoct a plan of who I'd take out first if/when necessary and to where I'd run.

Fortunately, things don't work out the way they seem, and I get actually get taken to dinner. Surprise! I'm not dead. There are many people eating and dancing to a live band. As soon as Host-dad begins walking through the seating area, literally every table turns to him, deeply wai, and then do the same to me. I received mad wai by proxy. It was pretty crazy. We were ushered to a table already loaded with food, drink, and mosquitoes. After we consumed our fair share of various animals, Host-dad went to wash his hands and got captured en route back to the table. It was time to dance. He got trapped by the hosts of the party and asked to dance. I didn't want him to feel alone among the other dancers, so I joined him. I proceeded to stomp around in a circle with arms out, wrists rotating hands in and out, and shaking my booty for 10 or so minutes. I was greeted with numerous comments of lah (handsome) and flashes of cameras.

I left contented- stomach full, and heart happy. To be sure, my family is small, but Host-mom and Host-dad are both awesome, and I do have my own room.
Posted by Unknown at 10:26 PM