This past weekend, Host-mom and I went into Suphan Buri to do a little shopping. We went to Makro, apparently Thailand's version of Costco. Host-mom was adamant about me finding something I would like to eat and that I was free to select anything I so desired. I didn't choose anything for a couple of reasons, a)  (pretty much) everything that is cooked for me is really delicious. They've definitely observed what I like/don't like to east closely and have catered to that to some degree and b) I haven't officially been invited into the kitchen for cooking purposes, so I'd be a bumbling fool while searching for cooking utensils/ingredients and I figure it would be easier to not even open that can of worms at this point.

While in the refrigerated dairy/meats section, once again, I was presented with "Do you want anything?" I was looking around, not really expecting to find anything of particular interest, but then I saw massive blocks of cheese. I jokingly said that I wanted some of these impressive cheese bricks, which of course was translated into, "Let's buy Jay cheese now." While the blocks were upwards of twenty clams a piece, if not more, there were some nasty Kraft singles available for far less. Now, I don't even eat these slices of "cheese" in the States, much less dream of eating them here in Thailand. But... Host-mom insisted on getting me some cheese, in addition to a couple of other items- "KoKo Krunch" cereal, and some baffling canned tuna hor d'oeuvres with crackers. We left, and I didn't give much of anything a second thought.

The next night, Host-mom and I are speaking about eating the purchased items. I mention that I would do so. Well, while there was no time frame attributed to the conversation, it definitely implied "tomorrow morning," to which I didn't fully understand until... tomorrow morning.

I wake and am greeted by Bpaa Lem. She generally speaks quickly, sans hand gestures, and I generally just smile and nod, and everyone's content with this arrangement. During the "conversation," I hear a few words in particular, namely gin kaao (eating), and I think about the previous night's talk with Host-mom, but continue on about my business. Now, Bpaa Lem always cooks breakfast for me, but I definitely did not smell anything on this most auspicious of mornings. I quickly put together that I am, indeed, on my own for breakfast this morning. Cool, no big whoop.

I fly down to the second refrigerator, grab some canned milk and conjure up a bowl, spoon, and some KoKo Krunch. I gobble it down quickly and Host-mom asks in Thai, "Is that enough?" At first, I say yes, trying to avoid being burdensome. But, admittedly, I am still quite famished and agree I need to gin kaao more. Host-mom makes mention of the toaster and motions towards the bread loaf sitting idly on the kitchen table. I shrug and say, "Ok." Host-mom disappears to complete her own morning rituals.

I plug in the toaster and look at the darkness setting. It's sitting on "two" out of "six", and for someone who likes darker toast, I figure this is certainly too light, and move it to "four." Satisfied with things thus far, I figure I'd also make myself a snack for work with the other items so graciously purchased for me since I was playing the role of self-efficacious volunteer this morning. I'm knee deep in tuna spread when I smell something burning. I turn my attention to the toaster and eject the bread-turned-charred bread. Now, in all honesty, I really don't mind consuming toast this, erm, toasty. Clearly it's not ideal, but I'll still eat it. I begin "buttering" it (butter here is often a not-so-strangely enticing mixture of metrics tons of sugar and alleged butter flavoring).

Right about now, Host-mom returns, scrunches her nose due to the burn smell, and sees my burned bread and gasps. She goes on and on about not eating it, making more, and it being bad for one's health. Then it gets weird.

She sees a sight, not too dissimilar from the picture below (save the sandwich is not yet complete and is dressed in tuna spread and fake, fake cheese). 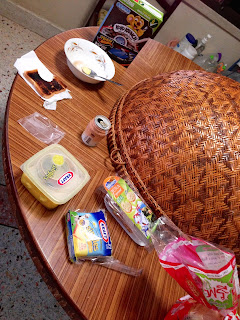 I only wish I could have captured her face, to share and remember for all eternity. It was perhaps the epitome of bamboozled- a perfect expression of confusion that any human culture of any time and space would understand.

Now, please understand it from her point of view- There's basically just a huge pile of shit on her dining table.

Now, please understand it from my point of view- I have what boils down to essentially zero resources and no knowledge of what I may possibly have access/permission.

She calmly asks, "Is this American breakfast?" to which I can't do much more than stammer. I definitely don't have the Thai language skills to share how embarrassing this situation is and that I am, in fact, decently talented in the kitchen. I desperately want to explain how I had no previous knowledge of the nuances of their toaster, that I had limited resources to make a meal/snack, and that I am indeed capable of feeding myself, and even others! Alas, all I could do is affirm her question, pondering just how far and wide this tale of Americans eating the equivalent of garbage for breakfast would spread.

Moments later, Host-dad walks by happily saying only, "Cooking, cooking!" Once more, I meekly smile, defeated, shrug, and say, "I sure did."
Posted by Unknown at 6:52 PM