This week's Friday Five looks takes a statistical look at some of my experiences thus far in Thailand and provides the information in picture form. These stats are by and large scientific, but definitely valid and one hundred percent able to be replicated by anyone. 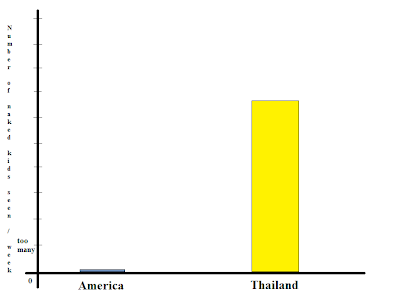 I have seen an inordinate amount of naked kids running around, and it's slightly disturbing. It doesn't even matter where they are, either. Literally, I have seen kid parts streaking across school grounds, in parking lots refusing to be oppressed by pants' tyranny, in picnic areas ruining meals, scurrying along the side of a busy road, enjoying a soak and play sesh with ducky in a small bucket near the bathrooms of a restaurant, bathing in a large ceramic dragon jar with siblings, and playing at the beach (but this one is to be expected, relatively). I'm sure I'm even forgetting some too, BECAUSE IT'S INCESSANT and one sight blurs into the next.

Perhaps it's just the increased exposure I now have to kids in general that accounts for the roughly one million percent spike in sightings (the slight bar depicting seen naked kids in America exists only for the  stray, naked kid that one sees at random). However, as the list of sighting locations notes, most are not actually at school though.... Regardless, maybe I'll habituate to it, but in general, naked kids make me uncomfortable.

On the flip side, for a pretty modest country, their kids are very skilled nude runners and show an incredible lack of dignity or shame. 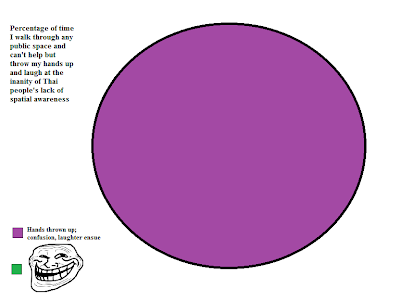 Thai spatial awareness is absolutely non-existent. Whether people are on foot, motorbike, or car, it's always "move first, look second." I truly believe it's due to the concept of practicality. If you do something ninety-nine times, and the same outcome happens each time, one could likely assume the hundredth time is going to yield the same result (which, however, is a complete fallacy and thinking error. Everything has it's own rate of occurrence and whether it's the first time or two thousandth time doing something, the odds are no less or greater a particular outcomes happens, as the occurrence (or lack there of), has no memory of the previous executions). This makes walking, riding a bike, and driving an adventure every time you go out.

Secondly, people locomote as if they are the only person that exists within a five mile radius, meaning they walk with their intent first and with respect to others's trajectories second and nothing second. People move from point a to point b blindly and leisurely with no concept of what is around them. Next, they have an uncanny ability to pinpoint the exact location to stand in that is the most inconvenient for everyone else and decide to set up camp there. Whether it's the middle of an aisle or ten people deep in front of a now hidden vendor, they are obstacles that can never possibly be avoided.

Finally, when enough people have muddled up the aisle enough that only a one way stream of people can filter through, you have to be aggressive and make your move through the passage if you want to proceed to your destination in a timely fashion (though this may contradict #4 in this entry. You'll see). The concept of "move only yourself and consider nothing else" creates an endless flow of people taking advantage of your kindness to let a few yais (grammas) through first, and you need to do your best salmon impression and swim upstream like a beast. I prefer the "broad squared shoulders" approach to crush anything that simultaneously approaches so I can make it through the narrow passage of doom.

As you can imagine, when you have thousands of people all operating independently of one another, as opposed to thousands of people observing the (walking) situation, making predictions, and coordinating their actions with what is presently happening and what they think will happen, you get a huge shitstorm with thousands of legs and no general idea of anything. With all of these things occurring, often all at the same time, I can only throw my hands up in a confused, defeated, fashion and laugh at how ridiculous it all is. 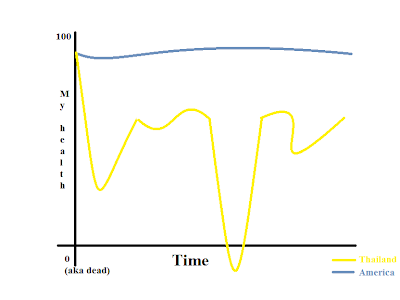 Now that myself and my colleagues have been in Thailand for five months, it dawned on me recently (read: today; because I'm sick, again) that I can't stay healthy for any sustained period of time. I am unable to think of any time in my existence that I've had so many consecutive, and different, afflictions. I have had diarrhea for weeks, a broken my foot, a bacterial skin infection, a semi-crippling back ache, and a common cold twice. After my initial healthy four weeks here, it's been all downhill.

In the States, if I've had more than three afflictions in a year, I berate my immune system until it performs better. Now, I'd be happy with only three. 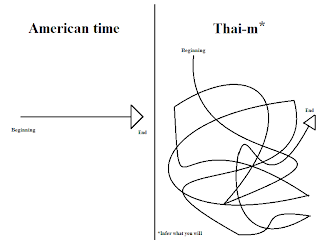 Time is a social construct. While seconds, hours, days, weeks, etc. tick away at the same pace for all of us, how we conceptualize time and its aspects- use, passage, value- is created by (sub-)cultures and societies in general. We learn the "rules" for time that are most applicable to our lives which, again, are generated by our environments.

That being said, time in America and Thailand aren't even in the same ballpark. Personally, if you tell me an appointment begins at 8:00 am, five minutes early is about five minutes late. From what I've experienced in Thailand, arriving at that same 8:00 am appointment at 8:30 will probably be thirty minutes early. I think if one considers basics of both American and Thai culture, a more clear understanding of time will emerge. Americans come from an individualist culture, one that values independence and individualism, which are fed by unique goals, desires, wants that are time bound. Americans are often (thought to be, at least) effective and efficient. We are taught to believe that the more effective and efficient we are, the more successful we'll be. Thus, arriving promptly to an appointment is important to us, as it aids in meeting a particular goal. Thais cultivate a collectivist culture, meaning the group is far more important than the individual or their wants/needs. Uniformity is critical and relationships are more important than effectiveness and efficiency. That said, while an American will make that 8:00 am meeting a "priority", if a Thai person is already with someone before 8:00 am, it's important they make sure that that interaction sees an organic ending, thus showing the person they are interacting with to be the "priority," before moving on to their next appointment.

With these ideas in mind, it's easier to understand Thai-m. Time here feels slower-paced in general, though in enormous oxymoron fashion, the actual passage of it has felt quick. If you have an English training for teachers slated for 8:30, expect things to begin at 9:00. If you have a five minute break built in between sessions, expect them to last at least ten minutes. Why? Because people are socializing, nurturing relationships. Even at school, while classes technically begin at every hour's "half past," my English classes rarely begin before _:40. While this irks me a great deal (because I'm experiencing a Thai phenomenon through a Western filter, and this disconnect is what creates ambiguity, confusion, frustration), I'm already learning to just jai yen yen. I've mentioned this before, work will always exist; people and relationships won't. Making sure the people you're with feel like they are important and cared about should be the most important thing, because that moment is your reality. You don't exist in the past or present, nor anywhere else but where you are. Therefore, make it the best moment it can be by loving those around you. 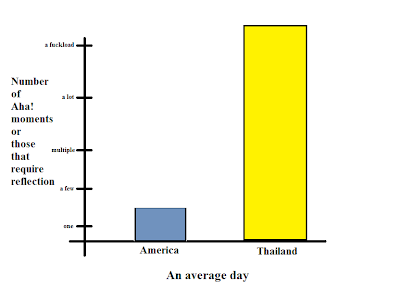 One of the many wonderful things about living abroad is the ample amounts of learning opportunities. Every day is an adventure and, provided you keep your eyes and mind open, there is so much to learn. I now get to interact with and watch how a different culture goes about daily life. As mundane as that may sound, the fact that you remove yourself from auto-pilot and remain mindful every moment of the day is beautiful and enlightening. I feel that when one is habituated to their environment, they blindly proceed through the day, pushing this button, talking to that person, eating some food. But when you're in a completely foreign environment, everything your senses compile is apt to be considered, analyzed, and reflected upon. Even today, while out for my assistant principal's daughter's birthday, I marveled at my roong paw aw's husband, who I am honored to call my friend. He is exceedingly kind to everyone and is always smiling. That's someone who I want to be like and I have reflected on how to incorporate his positivity into my life.

If I were still living in the States, I feel that the opportunity to learn new things about daily life would be minimal. I understand life is what you make of it, and if I truly wanted to learn, I would seek out opportunities. It's a little different though. You can't just read a book and learn how an other society lives. You may or may not be able to learn another people's perspective, but it's incredibly difficult without context of location and time. In the case in the previous paragraph specifically, I'm not saying that there aren't incredibly nice people in the States, but he is not in America, and therefore, I would never have been exposed to who he is. There is so much learning to do when removed from your comfort zone, and I'm more than happy to embrace and practice it.