July 6th through the 22nd saw me adventure to various parts of Thailand for both professional and personal reasons. The 7th through the 17th was reserved for "Reconnect." The 17th also bestowed upon me my first football match ever witnessed live (but as I write this, I seem to recall perhaps seeing some San Diego Soccers matches as a child, but can't definitively remember...) three weeks so you're all caught up.
Reconnect is a Peace Corps initiative worldwide designed to reunite volunteers to examine, reflect on, dissect, consider, discuss, etc. their first three months at site. Before departing for Thailand, I was really looking forward to this event. I thought it would be a really great way to compare and contrast experiences and then get to enjoy each other's company once again. As it turns out, this is generally true. Reconnect felt a bit more relaxed on the staff's behalf compared to PST, which was nice. Shoes, at least in my case, seemed optional and my beard remained part of my face successfully. The sessions were a bit more laid back and we were treated much more like adults, even ones who have know been living abroad for six months. Many of the sessions were well conceived and promoted the exchange of ideas and held an open-minded mentality. Language classes, while draining, were welcome, and I felt my Thai improve a bit, reminding me I really need to find a Thai language tutor soon. The end of the week saw a fun celebratory dinner for staff and volunteers a like.

By the end of the week, I was completely drained. It felt as rigorous as PST, but for only one-tenth of the time. PST seems like so long ago, but it's amazing to think that we all survived it. It is not easy. Remembering back some, we all had ten to twelve hour days, six days a week, and then had to "continue" the evening in Thai, learning language and customs, and then usually going on bpai-tiao with our host families on Sunday. For ten weeks. I'm convinced that PC has to rely on volunteers' enthusiasm and passion to be able to push such an intense schedule. There is virtually no way I'd commit to something that intense again without knowing about some extravagant pay-off at the end.

The second week, through mid-day Wednesday, was our second Counterpart Conference. These were sessions designed to touch on topics that either volunteers or our Thai colleagues had questions about. A teacher that I don't teach with, Kru Jip, was sent, to which I was initially quite confused. However, her English is very good, and throughout the conference, she and I collaborated on a number of ideas of projects we can do as a team at the school, and perhaps within the community, and I was very appreciative of her presence.

Aforementioned in my previous entry, I had a bit of a mental breakthrough in my attempt to re-progress to peak running condition just before Reconnect. Fortunately, for these ten days my good friend and running buddy, Colin, was present. Having him around for this time was very advantageous for continuing to get into a running habit and remembering that running daily doesn't necessarily mean slogging through four to ten miles daily, and in fact, is quite the opposite. We did medium length runs, runs in the rain, sprints, intervals, and recovery runs. It was very beneficial, to the tune of me feeling the best I have when running since arriving in Thailand. It isn't close to where I was, but it's a step in the right direction. While it was difficult to move into my new place for four days and begin to develop some exercise routines, only to have to be away from site for two and a half weeks, I definitely am proceeding forward with a firm exercise and diet plan in the hopes of regaining, and surpassing, my running level before Thailand.

Perhaps one of the coolest things about Peace Corps is the connections made and the network you're automatically apart of when you finish service. During Reconnect and PSN training, I had an opportunity to meet with State Department/Embassy officials. As a person who has flirtations with considering careers abroad and with the government, I definitely take these gift-wrapped opportunities to put my best foot forward, because we really don't know exactly with whom we are socializing or if they could play a role in my future. In doing so, I've received a few invites already from these individuals to contact them and meet up to further build a relationship whenever I may be in Bangkok.

I definitely left Reconnect feeling reinvigorated for many things- teaching my kids, creating positive behavior reward systems, working with Kru Jip on various projects, working out, integrating into my community more effectively via techniques shared with me from other volunteers, rededicating myself to improving my Thai. It was amazing to hear what other people were already doing at their sites; it was very motivating. At the same time, I just realized, "this is it." As in, I'm in it now. We're almost seven months in to service, with twenty remaining, and it is now primetime to grow relationships and start getting work done.

However, on the flip side of things, I was incredibly exhausted by the end of it all, and not just for the reasons enumerated above. I'm definitely an introverted person and require alone time daily to recharge my batteries. At Reconnect, I received just north of zero hours of this time. This was difficult. I enjoy being introspective and value time dedicated to solitude, and I just didn't get it. I am very appreciative of my fellow volunteers and their support and company, and this is in no way a criticism of any of them. I'm jst never going to that person who loves spending every waking moment with anyone (save my partner and immediate family), especially in large numbers. It was definitely a challenge, and it was great catching up with everyone, but I am also relieved it has ended. Also, Chainat redefined "boring." There was nothing to do or eat. Everything was many kilometers away. There was a hill that had some temples on it that we eventually made our way to, though. That was kinda cool, I guess.

After Reconnect ended, a number of us raced to Bangkok. Jes and I had PSN training the 18th and 19th, but before that, we, with Christine, had the Chelsea(!!) game to watch. Due to Bangkok being the city of traffic (it seriously has continuous traffic jams that only migrate throughout the city depending on what time it is, but never really ever fully disperse), we arrived with 10 minutes remaining in the first half. Even crappier, Christine had plans to watch the first half only, as she had a late train leaving that night. So... she left pretty quickly. The game itself was pretty fun, even though we saw no scoring, and endured hours of transportation. Football in countries not named America is a fun experience.

The following morning we had PSN training. It was a nice treat to finally meet the PSN members from 124. We all know each other from Facebook more or less, or through the grapevine, but it was good to connect in non-digital and/or second-hand ways. Training was less "training," and more discussion/interaction, so it was fun. I also ate a shit load of cheese, courtesy the PCMO (thanks, Dr. Rit!). We easily could have had training for many days, including planning time, but as with all things, we had a definite timetable, but I'm excited to integrate new ideas to what 124 has built completely on their own, and continue to grow and expand PSN for 126 and all the eventual incoming volunteers who are lucky enough to serve Thailand.

Finally... Mamie, Rosie, Keith, Andy, Jes, and I went (Thai) camping at Kaeng Krachan in Petchaburi. I qualify camping with "Thai" because we stayed in a bungalow. With wifi. And a shower. Easy access too food and drink. Lots of transportation. And hilariously manicured grounds, meticulously kept for people who actually want to camp in a tent, but not without all those other great things. Regardless, we had a load of fun. Lots of bonding, laughs, trekking. Sunday, we went to Paa La U waterfall. There, we hiked up a good ways along the river and witnessed several beautiful, though small, waterfalls. When we got to the highest point at which we were permitted, we hopped into the incredibly cold water and fought current and fish. 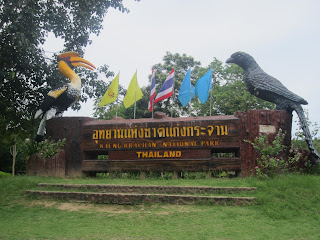 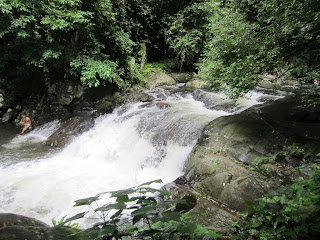 The waterfall was an eighty kilometer haul from where we were staying. We were also told that the grounds were home to numerous wild animals, elephants and tigers to name a couple. We were all hopeful we'd see some sort of animal, regardless of how dangerous they may be, but weren't very confident we actually would. On our trip back to the campsite, we came upon a bit of traffic backed up. I actually thought nothing of it, but Mamie later revealed she had hopes it was due to some wild interference of sorts. Sure enough... 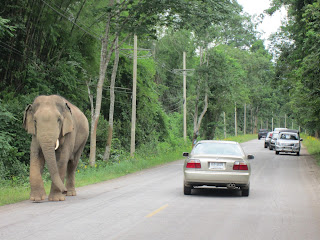