This morning at school seemed to be like any other typical day- Greet the kids, chase some of them around the school, morning assembly, and the like. However, towards the end of the assembly, the school director took the mic, something he very seldom does, and began to speak. As in many cases, I began to zone out pretty quickly, as attempting to understand a foreign language magnified through an enhanced megaphone makes it nigh impossible to understand.

I was having one of my best zone outs to date until I heard "... kruu Jay..." and I immediately snapped out of it and began looking around. I'm sure I had on a face not unlike that of a kid just woken up in class by the teacher to answer a question. The other teachers laughed, and I was on high alert. What forthcoming humiliation was just told to all thousand students and staff?

One of the English teachers, kruu Chan, approached and translated a bit for me, something about a longboat, raising (razing? rising in?) it, and "go now." I blindly followed the other teachers and a swath of male students towards the local wat.

We were greeted by a long trailer of sorts, to which I was pretty confused. "Why are literally a hundred of us here. This thing has wheels. Can't ten of us just push it, yes?" All the kids and a few teachers began (poorly) maneuvering it towards an empty lot between two monks' domiciles, which immediately prompted a new observation, "This many people moving something this large is likely a bad choice due to the impossibility of everyone being on the same page." When the trailer needed to be pushed, it wasn't (e.g. out of a rainwater channel). If it needed to be stopped, it would continue moving (almost pinning children between it and a building). Were I to rank this situation on a one to five scale for potential for disaster, it definitely qualified as "imminent." 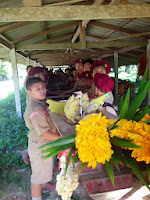 Everyone began walking towards a covered area beyond the trailer and when I finally made my way there, I discovered a huge longboat, and that's when it clicked- We're going to lift this crazy heavy boat onto this dilapidated looking trailer, and hope and/or assume that nothing too terrible befalls any of us. Ok, Thailand, this should go swimmingly.

Longboat races are very common and popular in Thailand. These longboats seat upwards of forty men who race other boats filled with forty men over a very short distance (one hundred meters?). My town has added an extra element for a bit of spice (read: danger)- Each boat has a flag-grabber sit on the very front tip of the boat to snatch a flag that is situated on a string ten feet high that runs perpendicular to the river at the end of the hundred meters. The first boat to grab their flag wins. In my town, there is a river that effectively bisects it. Right by the town's equivalent of city hall, there are cement stands along the river so residents may watch the yearly longboat races. It's a fun and festive tradition. Many of the local wat have their own boat(s), and presumably, a stable of strapping young men to navigate it.


Now, granted, everything spoken was (obviously) in Thai, but I was unable to discern any sort of individual who might be leading this task. The kids were the muscle, the teachers were the muscle, the monks were the muscle, and I felt like no one was the brains. But, as a man, I feel like there is no situation that can't be fixed by just muscling the shit out of it. However, I also feel like I must admit that should this be the route that we were about to embark upon, the chances of disaster striking definitely had to have increased markedly.

And so we went.

While marveling at this (and how potentially dangerous it could be), I began pondering the entire situation and how it was influenced by a few things, namely place and culture. This all struck me as the epitome of "collectivism"- Dozens of people working together for the good of the group and each other, but no one individual in particular. It was a very wonderful opportunity to see it working in a positive way. This then stemmed a few questions- In this particular scenario, do people act like this because it's cultural, or because they lack any other actual way of moving such an object? Or is it a combination thereof? Were longboat racing a "thing" in America, would kids from a local school aid revered community members in moving it from Point A to Point B? Would parents get upset that fulfilling social and cultural obligations took precedent over "precious" learning time? Would there even be an opportunity to do so because isn't there technology or machinery to do this kind of task?

A few thoughts, grunts, lifts, and re-positions later, we were there (and surprisingly disaster free)!
After we successfully relocated the longboat, kids returned to class and I lingered, observing parts of my town and their rituals I had not yet seen. In particular, the monk seen below began mercilessly smashing this bell. I really wanted to think that it was due to our magnificent feat of strength, but in reality, I think it's just a daily routine. 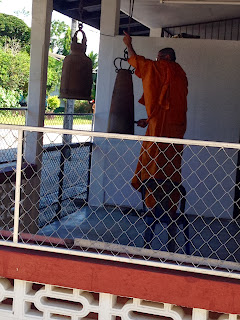 I eventually left, but not before taking a final shot of our handy work. Good work kids! Fine job, collectivism. 'Til next time, confusing cultural thoughts. 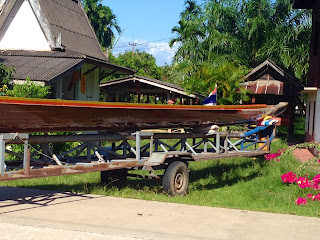