Railay: Of Burkas And Boobs

So, to catch up. I apologize for my hiatus of sorts, lately. Now having been at site for just shy of eight months, volunteers from 125 are starting to really get into the swing of things. Some have begun to draft projects in collaboration with their communities, others are nearing completion of their first (of four) semesters, some are still adapting and integrating into their community (this is a never ending process, actually), and in reality, all of us are some combination thereof. August was a particularly busy month for me, with the typical four days a week teacher training, helping out fellow Chumphonian, Theresa, at a Brighter Thailand Foundation leadership camp, a quick vacation to Krabi, and then Project Design Management, a training facilitated by the 124 members of the Project Review Committee (which I will facilitate next year as a 125 representative). While the BTF camp and PDM both deserve their own blog entries, for now, I'm only going to focus on our vacation to Krabi (because who wants to read about a Thailand PCV's work when some of the most beautiful sites in the world are no more than five hours away?).

After completing BTF, Lauren, Colin, and I went to Krabi for a little R&R following literally six days and seven nights of twelve hour days mentoring, playing, and bonding with fifteen secondary students and twenty-nine elementary students. It was a truly wonderful experience, but I was a total exhausted wreck afterwards, and a few days of sitting on one of the most stunning beaches in the world was just the ticket to get right again. We stopped in Ao Nong for a quick hour, just to eat some pizza (the first of many) and get our ride out to Tonsai and Railay organized. Both of these beaches are on the mainland of Thailand, but due to jungle and sheer rock cliffs, they are only accessible via longboat. 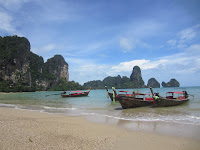 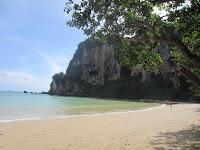 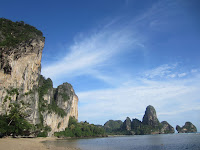 Tonsai beach is only about a kilometer long and very underdeveloped- stick shacks, restaurants, bungalows large enough to house a full mattress, no showers, etc., though known for it's excellent rock climbing. However, you get what you pay for, and for 150 Baht a night, no one heard me not complaining. It's absolutely brilliant. We were able to enjoy perfect weather during the low season, so there were very few people, and there were many times we were the only people wandering about the beach. Many pizzas and cookies were consumed, with equal parts laughs being had.

The following day, we did some minor rock climbing and hiking to move from Tonsai to Railay. The sights only became more unbelievable.
Lauren had previously mentioned a hidden lagoon that required some hiking on Railay, but hadn't done it herself. Colin and I noted it's likely level of fun and stored the information for later. Lauren, who's site is only a couple of hours from this paradise, acted as tour guide of sorts and showed us around. We passed by some ropes, rocks, and mud and she mentioned this was the path to the lagoon. Colin and I didn't even have to speak to know our next steps were vertical and no longer forward. Lauren decided to let the boys be boys, and went to the beach. We definitely had shit-eating grins spread across our faces as we monkey'd our way up the rocks. Note our attire in the previous picture.

We climb a ways, and I immediately note it's not the safest thing, but because I wanted to Thailand, I didn't think much of it. We make it to the top and are unsure of where this lagoon is, so we just start exploring. There are paths, but it's definitely rainy season. It's muddy and wet. We slip and slide our way through the path and end up at a lookout. Beautiful, yes, but no lagoon.


We backtrack and take another wrong path. It's ridiculously muddy and it doesn't seemingly go anywhere. We (correctly) infer that this is the incorrect direction, and backtrack to where the vertical ascension plateaus and the paths fork. We go the only other way we can and it begins to "feel" correct. It feels this way because the path is beaten, dirty, and muddy as hell. There are ropes designed to afford travelers safer passage, but are wet and slippery. Rocks are muddy and slick, and water pools everywhere. We climb, dance, hop, tip-toe our way until we reach this point, in the following picture.

There are now essentially three fifteen to twenty foot vertical drops between us and the lagoon. As Colin and I figure out just how to navigate this, two parties catch up to us, a group of three women from Chile and a couple from somewhere and someplace. They all look at us and our flippy floppies and are noticeably impressed. They share that they did actual research and learned to NOT wear sandals here due to the intensity of the hike and climbing. We shrug and claim we're impulsive and adventure seekers.

Unfortunately... I'm just a little too nervous to actually proceed to the lagoon. Sandals or barefoot, both seemed too dangerous for me (Uncle Panuthat, I'm sure you're pleased I used my RADAR! And Ma, just because you're not around, doesn't mean your voice isn't in my head telling me to be careful) and I have to end my journey, 90% complete. Colin mans up and goes the rest of the way. I look back and this is what I see.

All things considered, in flip flops, I'm pretty pleased with how far I got. It's not like I won't go back again any time soon. Colin makes it to the lagoon, swims with the visually appealing Chilean women, and returns. We continue to get muddy as can be trekking back up the long path, but it's totally awesome and worth it. Finally we descend the original climb and meet up with Lauren.

We travel by these huge cliffs with monster caves and get to Railay East and it's packed with people. My camera also dies right about now, unfortunately. So, you've read now ten-ish paragraphs, and still must be wondering why this post earned the title it did. Again, with so many people, you get quite the variety of people here- Muslims, Americans, Thais, Europeans, and so forth. While swimming, we enjoy the people watching. It is noted that Muslim women retain their entire cultural apparel while swimming, burka and all. Nearby, there is a seemingly pretty liberal Westerner- she has shaved sides of her head, some tattoos, in a bikini. Not more than a few minutes later, she removes her top (MUCH to the pleasure of the local Thai men) to catch some sun and avoid tan lines, I 'spose.

Lauren says, "Only on Railay will you find burkas and boobs within twenty feet of each other."
Posted by Unknown at 9:06 PM