Things that are now things that have happened:
We woke at a typical morning hour to begin the day, and unfortunately, Nadia felt completely ill. She attempted to get ready for the day, hoping it was just a waking feeling, but sure enough, some stomach bug had her in its clutches and wasn't about to relinquish her. I reported to the rest of the group what was happening, and as we didn't have any set plans for this day, figured it would be best to let her try to sleep it off while the rest of us figured out logistics for the rest of the trip.

As Colin, Ammy, Nadia, and myself had made reservations for a hot-air balloon ride over Bagan, we decided sorting out how to get there would be important. I had overheard another visitor at Okinawa needing passage to Bagan that night, but that all the buses were full. Upon inquiring more, apparently those few days were sandwiched around a full moon, which has some bearing on some celebrations, which apparently makes Bagan a very hot destination. This was a bit nerve-wracking, as the four of us had already paid exorbitant balloon fees, and the thought of potentially missing it due to transportation was displeasing. We decided that traveling via overnight bus this night would be the most economical approach, as we'd just have to pay for a bus ticket (~ $15), as opposed to lodging for the night (~ $25) in addition a day bus ticket.

We weren't entirely sure of what transportation might be best in terms of comfort, expense, etc., and checked out the train station, but their digs seemed expensive and not the most comfortable, considering it was going to be a seventeen (!!) hour ride to Bagan. The bus station was across the street so we went there.

By taking the night bus this day, we'd arrive in Bagan with a full day to explore before then riding balloons the next day, which seemed the most efficient with regard to "vacation time." When we asked the attendant helping us with bus tickets, she informed us that this night's overnight buses were full. We (well, we thought us and the attendant) decided with the attendant that we would option for the following morning's bus at 800 am and chose to also purchase return tickets, as it seemed like any sort of transportation here in Myanmar was nothing short of a cluster f, and doing things well in advance would be to our advantage. Our attendant then went ahead and booked our return tickets from Bagan back to Yangon, but not the morning to bus like we thought we had told her (language barrier stuff, it's fun). So, she gives us our ticket, noting it's from Bagan to Yangon, and we all give her a very confused look, attempting to convey that it's difficult to return from Bagan if we haven't even left Yangon yet... She now understands we want the morning bus and attempts to book it, but in the time it took to reserve the return trip, the morning bus to Bagan fills. This is all becoming rather laughable at this point, but really, Myanmar was just getting started.

We begin to tell her about our balloon plans and how critical it is for us to be there by a specific day and time, and then begin to inquire about the possibility of an overnight the following day. The attendant isn't quite sure, and retrieves a different woman to help us. After explaining the situation, and how we're stuck with purchasing the next day's overnight bus, the woman becomes "afraid for us," which we imply is because of how unreliable/untimely bus departures and arrivals are. Even if we took an overnight to get into Bagan, allegedly at 400 am, with an hour or so before our balloon date, it's too small and scary of a window. Colin and Ammy decide to inspect the details about a potential train ride and the woman tells me to wait. After about ten minutes, she asks me that if she is able to find four seats on a morning bus leaving the next day, if we'd purchase them right then and there. I felt uncomfortable agreeing to this without Colin and Ammy, but felt it was our best option, and agreed to it. Another five minutes pass, and she is able to pull strings (or something), and get us the needed bus tickets. Jes finds Colin and Ammy, relieving them of their train inquiry, and fortunately they're satisfied with the bus tickets. Incredibly grateful, though exhausted from the two hour ordeal, we leave to return to the hostel.

I check on Nadia, whose stomach is embroiled in a terrible battle, and she's just sleeping, uncomfortably, off and on. I inform her of the morning's happenings, check if she needs anything, and leave with the others for lunch. We decided to see if there were any fun things near the river and to check out Chinatown, as it wasn't too far of a walk.

We "arrived," but there wasn't too much distinguishing Chinatown from the rest of Yangon, and the river was all industry and zero fun. We were parched at this point, so we sat down for some sugarcane juice. 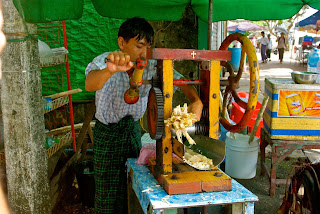 After this kind of tasty drink, we found some restaurants and (once again) ordered the Burmese Chinatown's version of rice, noodle, and soup dishes. Lucky for us, however, close by were two tasty deserts- egg custard and street yogurt. While the former doesn't require too much explanation (it is eggy goodness in some warm milk), the latter, I feel, does. Colin had heard about this street yogurt, or strogurt, if you will, from a Peace Corps Thailand staff member. He was interested in it,

and after telling me about it, I was too. Basically, you can add "street" in front of virtually any food/animal, and I'm interested (e.g. street chicken, street drinks, street donuts, even street meat, etc.). Strogurt was what appeared to be some sort of milk poured over cracked ice, with thin slices of sweaty yogurt gently draped on top. I'm not sure if it was just drinking something cool on a blazing hot day, the sweet/bitter combo, or what, but I definitely enjoyed this street yogurt, and wanted even more. I was secretly hoping Ammy, Jes, or Adam would purchase one and not like it, giving me an excuse to eat theirs for free. Sadly, it was not the case, and we returned to the hostel for a much needed siesta.

Once more, I checked on Nadia, who was still fighting the good fight, but in obvious agony. I just tried to comfort her anyway I could during the break. The five of us met up again at 500 for dinner, and, surprise, ate Burma's version of rice and noodle dishes. Things to me felt a little more somber, as we had been one person down the entirety of the day, seemingly without prospects of Nadia improving much, and we called it an early night on account of an early wake up to get to our morning bus.

Back at the hostel, I asked our incredibly kind hosts if they had any sort of anything that would help with a wrecked GI tract. They gave me little brown pellets that I can only describe as magic and/or wizardry. I gave them to Nadia, and sure enough, she began to feel a bit better not much longer after putting them back. I was nervous for her and the thoughts of how potentially awful/undignifying an eight (or rather, as we will see, eleven) hour poop-filled bus ride could be.

Observations and feels:
I felt very lucky to be at the guesthouse (Okinawa) at which we were staying. The gentlemen running it were beyond helpful- letting us make phone calls to Bagan, finding us medication and any other items that might make Nadia more comfortable, and were very knowledgeable in general. For as bad as the day went with Nadia feeling like death and having an incredibly difficult time purchasing bus tickets, these guys gave their best efforts to make home away from home as comfortable for us as possible.

Day 2's morning brought me a conversation with one, Rob, from the UK. We had a conversation about travel, home, learning about oneself, and Peace Corps. He claimed that he had just recently spoken to another Peace Corps volunteer during his travels through SE Asia. I inquired what the conversation was about, and Rob stated that the person was incredibly negative and jaded, criticizing his host country nationals, his job, and I guess everything else. Rob said he was pretty uncomfortable and wanted to escape the conversation as quickly as possible. He said it was interesting to speak with me, who shared with him a more or less positive view of my service and honest opinions about Peace Corps, and hear a stark contrast to the PCV who spewed nothing but vitriol. I told Rob that this PCV was inevitably one who learned nothing- they were too Western in their approach, didn't bend to meet his community's needs (not the needs he perceived). I told him it was unfortunate that he had this interaction with this person, and he thanked me for my positivity and humanitarian approach to traveling.

Throughout the day, I still marveled at all the sights Myanmar offered. Daily life felt so foreign to me here. I began to ponder, though, about how long life has looked like this. Considering Burma's fledgling freedom, I was curious if people still operated the way I was observing them operate just a few short years ago, or if things were very different? What do people do on a daily basis when oppressed under a military regime that promotes violence and poverty as their weapons against its subjects? Were there jobs to attend? (Mis-) Information to be taught to children? Protests to throw?