That One Time A Political Rally Showed Up At My School

Perhaps some, or many (or none?) of you are familiar with the intense political tensions presently gripping all of Thailand. The current political crisis has been ongoing since about August 2013, when the Thai government introduced an amnesty bill that absolved political offenders since the 2006 coup.

(a bit of required knowledge incoming)

The bill initially did not cover leaders, but was then amended to add Thaksin Shinawatra. This outraged the Yellow Shirts of Thailand, subjects loyal to the monarchy and His Majesty The King. Thaksin, founder of Advanced Information Systems (AIS; Thailand's largest communications firm) is a former business tycoon turned politician turned Thailand Prime Minister turned self-imposed exile (Dubai)). He essentially used his power and country as legitimization and a piggy-bank, respectively, in myriad ways. Thaksin was charged with corruption and sentenced to two years in prison, which he has not served, but he and his cabinet have faced multiple allegations of treason, authoritarianism, conflicts of interest, lese-majeste (insulting HM The King), tax evasion, and human rights violations (through non-intervention and permitting the extreme violence in the Far South to escalate dramatically, with it being the most deadly it's ever been most recently).

However, Thaksin is hugely popular in Northeast Thailand (Isaan; many regions are considered Red Shirts- Thaksin supporters), due to many schemes aimed at economic development (poverty alleviation) and improving access to health care. The populous and rural poor were a largely untapped voter base. While some of his schemes were successful, many, either successful or failed, often times benefited his vested interests directly. In addition to this, Thaksin is accused of buying the rural poor vote through "hand outs," including his 30 baht universal health care scheme and micro-credit development loans. One could argue that he was both incredibly helpful and detrimental to Thailand and its development.

In 2006, Shinawatra and his government were ousted in a bloodless coup, which has created, more or less, a revolving door of prime ministers, most of whom have been legitimately selected due to the massive following he grew in Isaan. However, three of the four prime ministers after Thaskin have also directly related to him.

The State has a very useful timeline of events here, but here are some important dates:

May-September 2008: Yellow Shirts accuse Samak as a Thaksin puppet and he is removed, but "only" due to a conflict of interest (accepting money for a cooking show appearance). Parliament selects Somchai Wongsawat as the new prime minister. Somchai is Thaksin's brother-in-law.

March 2010: Red Shirt demonstrators protested in Bangkok to drive Abhisit from office. In May, Abhisit and Member of Parliament Suthep Thaugsuban authorized the crackdown on Red Shirt demonstrations, leading to the death of 91 protesters, injuring 1800, and ending the protest. Abhisit and Suthep would eventually be charged with murder in December 2012.

(returning to the recent past)

Since I arrived in Thailand in January 2013, I've been watching all of this unfold in a way. Granted, I don't speak/read Thai well enough to watch news/read newspapers, but I hear about all of the happenings from my friends and co-workers. My community in Chumphon is a staunch Yellow Shirt area, firmly loyal to HM The King, and those same people have been active in the protests in Bangkok. Since it's big news to them, it invariably becomes big news to me.

Aforementioned, last August, the amnesty bill began gathering steam in the Thai political houses. This created quite a stir throughout the country, obviously, and prompted severe backlash directed at Yingluck from Yellow Shirts. Parliament quickly backtracked and sort of killed the bill (it could have been able to be revived come April or so, but with the direction of the protests, this seems unlikely), but the anti-Thaksin movement continued to gain considerable strength, intent on purging all links Thaksin may have to Thai government. Note this amnesty bill would also have cleared the murder charges of Abhisit and Suthep from the May 2010 Red Shirt crackdown.

In November, Suthep accepted (took?) the lead of the People's Democratic Reform Committee (PDRC) and began leading the protests in Bangkok. Anti-government protest rallies have topped 100,000 people, and nightly rallies in Bangkok, and throughout Yellow Shirt areas, are held.

In December, Yingluck dissolved the lower house of Parliament and called for new elections on February 2nd 2014. However, the PDRC was not content with this decision, as they want political reform before elections (once again, they are the minority party and likely to get legitimately crushed in the polls by pro-government voters) and vow to not let them take place.

While all protests have been peaceful, and military leaders insisting they will both remain neutral and involved, December 26th marked the first day of violence, as a policeman and anti-government protester are shot and killed. About a week later, an additional man is shot and killed in Bangkok.

On January 13th began "Shutdown Bangkok,", with the PDRC  protesters occupying critical intersections in Bangkok in an effort to cripple Thai productivity and force caretaker prime minister Yingluck and her cabinet to step down. On January 17th and 19th, Grenades are thrown into PDRC crowds, injuring sixty-eight people and killing one man.

Meanwhile, in the mid-South of Thailand...

Due to the escalating violence Suthep has called on the united Yellow Shirts to begin laying siege to government offices. My school, being public and funded by the government, has closed for (a minimum of) two days, with many other local schools, the city municipality, and public health offices also being shut down. Other Southern PCVs have reported the same.

Around town, many people wear Thai colors, political shirts, and/or adorn themselves with accessories draped in their country's colors. Individuals blow whistles, clack noisemakers, and participate in nightly rallies. The vibe is different- People are more electric, a buzz in the air. No longer is my little community the sleepy fishing hub, but rather deep in the throes of revolution. Even children are politicized, with many wearing political outfits/sayings, likely without even knowing what they mean (this should constitute its own blog post. Read my friend and fellow PCV Colin's entry about this somewhat).

Finally, to address the title of this blog entry, yesterday, as school ended and I was waiting for Nadia to show for our Teacher English club (and desperately wanting to buy a chaa yen- Thai iced tea), I walked out to the street to find the physical manifestation of Suthep's plea for Southerners to shut down the government beyond Bangkok: 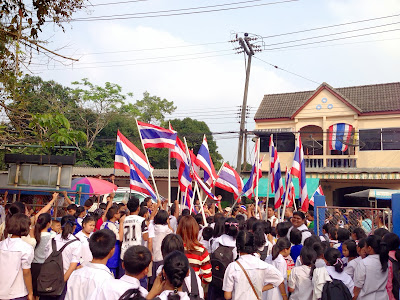 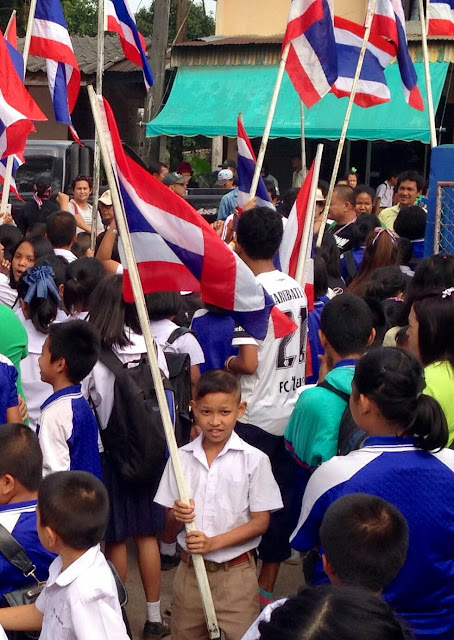 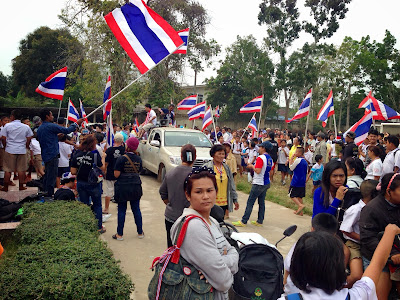 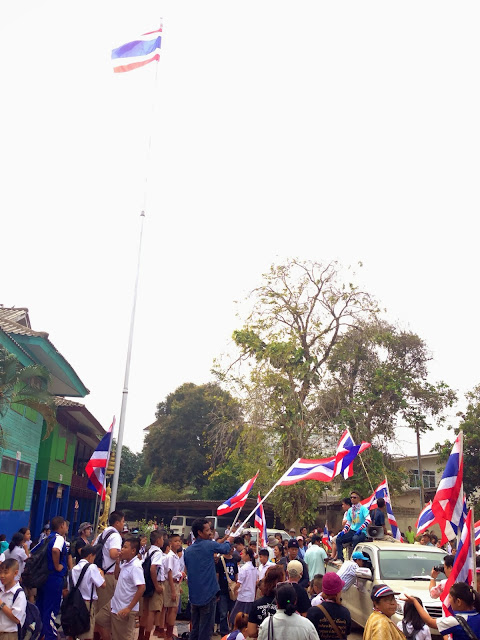 I'm not sure at all when this will all end, or how. I can only hope that it is a peaceful transition. Please understand I write this entry merely to inform and share with others what is happening in Thailand. While at one point in my life, this all would have seemed very trivial. Now, it's very real and critical.

While fascinating in its own right, it's also been frustrating and a tad unnerving. I have many opinions on the matter, but will withhold them until we can talk face-to-face. However, it has given me perspective on American politics. Before Peace Corps, I thought the bi-partisan politics there were separated by a huge chasm. But, after seeing first hand what is happening in Thailand, that chasm looks much more manageable than previously thought.
Posted by Unknown at 10:28 AM